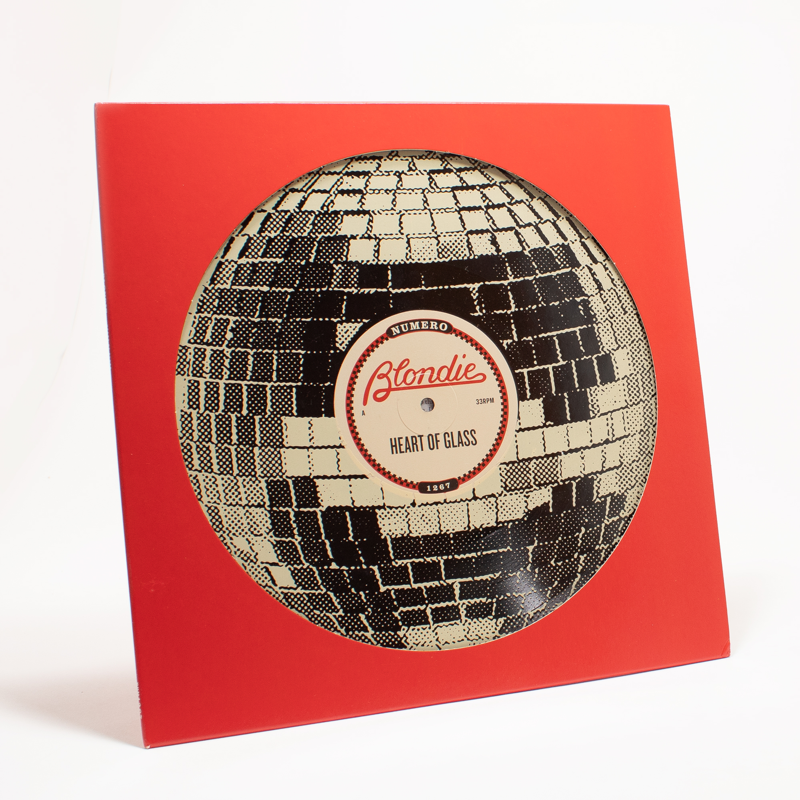 The song that burst Blondie out of the streets of the Bowery to #1 on the charts, “Heart of Glass” was the pivotal moment in punk’s choreographed slamdance with the mainstream. Inspired by Kraftwerk and Giorgio Moroder, Blondie transformed their campy “Once I Had A Love” into a Roland-driven juggernaut and never looked back. Explored and exploded via six distinct versions remastered from the original analog tapes, the history of “Heart of Glass” is documented here in a copious essay.

*More info on "Heart of Glass":

“‘Heart of Glass’ was one of the first songs Blondie wrote, but it was years before we recorded it properly,” guitarist and co-writer Chris Stein said. “We’d tried it as a ballad, as reggae, but it never quite worked. At that point, it had no title. We just called it ‘The Disco Song.’” “The Disco Song” needed to be sung in falsetto by a punk singer, introduced to a Roland drum machine, written and rewritten by a neurotic, genre-omnivorous guitarist, and ultimately produced by an Australian perfectionist. The “Heart of Glass” experiment was more ambitious than the song’s inventors could have known.

In 1974, Stein brought a germ of a song to his then-girlfriend and bandmate, Blondie’s irreverent lead singer Debbie Harry. “When Debbie and I were living in our top-floor apartment at 48 West 17th Street, I often messed around on a borrowed multitrack tape recorder,” Stein told Marc Myers of The Wall Street Journal. Harry free-associated her lyrics upon hearing the proto “Heart of Glass.” “I was just walking around the house, we were on the Bowery by then,” Harry recalled. “[I was] riffing on Da da da da da! Dah-dah dah-dah. Seeing what flowed out.” The song became a constant presence in the couple’s home, even in their bedroom. “I remember Chris lying on the bed strumming those chords endlessly,” she added. “Sometimes I had to fight for space on the bed—it was me or the guitar—but after a while I got my own bed and made up the lyrics. That’s how we wrote the song.”

“Rhythmically, I was trying to mimic a dance song, like [Shirley & Co.’s] ‘Shame Shame Shame,’ drummer Clem Burke said. “I wasn't doing a basic quarter-note bottom on it; a quarter-note bass drum. I was moving the rhythm around a lot more.”

“Even though it was complete, it was wrong, and I knew that if we could get it right it might be a big hit,” producer Mike Chapman said of Blondie’s “Disco Song.” [10] That an unfamiliar-to-them producer could make something new out of a song they’d done so many times seemed ludicrous. Chapman heard out the band’s ideas about the song’s feel and texture, but drew the line where he saw fit. “In discussing what to do with 'Once I Had A Love' I tried to include everybody, and after we played it a few times I said, 'Let's get rid of the reggae.' We then tried to do it as straight rock, but that didn't work, and I could see Debbie was getting a bit frustrated. So, I asked her, 'Debbie, what kind of music that's happening right now really turns you on?'” Chapman explained. “She said, 'Donna Summer.' I said, 'OK, then how about us treating this song like it was meant for Donna Summer?'”

Keyboardist Jimmy Destri came up with the idea that would change the song’s D.N.A. permanently. “It was Jimmy who brought in the drum machine,” Stein recalled of the Roland CompuRhythm CR-78 that provided the iconic clicking percussion that would ultimately open “Heart of Glass.” At the time, using a Roland drum machine was an uncommon choice for a rock band to make, even on their lone disco song. “These were used for like Guy Lombardo-type bands in the early days,” Stein said. “Guys who were playing in clubs and couldn’t afford a drummer so they had one of these things going. I associate these with really schlocky lounge acts.” To get the sound they needed, it was necessary to press two buttons—“Chacha” and “Rhumba”—simultaneously, with the tempo for the machine cranking the patterns to halfway up.

“The backing track took over ten hours to get down,” Harry later wrote. “We spent three hours just getting the bass drum. It was the hardest song to do on the album, and took us the longest in studio hours.”

“Recording the song took a little over a week, leaving us four weeks to finish the album. Then came the editing process. We must have made 30-to-40 edits for the final master,” Chapman said. “And we listened, and realised that we had created a very unusual record. It was us trying to do disco, and not really pulling it off. It really and truly was an experiment. It was unlike anything that any of us had done before. I knew this was the hit that I was trying to make.”

“It was conflicted in a lot of ways, but it was fun. It was just very fast, how it happened,” Stein said about the success of “Heart of Glass.” It only took three incarnations of the song, five years since its inception, and a lot of synth-drum strife for “Heart of Glass” to become an eternal, legendary, unmistakable part of culture. “I don’t know if I would’ve changed anything,” he added.

“With me it’s a psychic thing that has to do with the beat,” Harry wrote in 1982. “The 4/4 heartbeat rhythm has a calming effect on the listener. It’s popular because it’s biological.” *

By signing up you agree to receive news and offers from Blondie. You can unsubscribe at any time. For more details see the privacy policy.